New Ways to Get Outside Cause for optimism: A boom in stunning public parks! 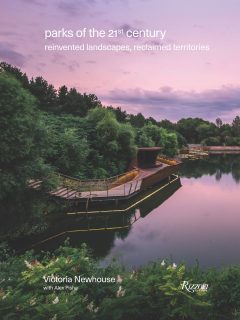 City dwellers have long sought refuge in urban parks where nature, albeit somewhat tamed, reigns supreme. A simple walk in the park can do wonders for one’s psyche, not to mention overall health. “Nature holds the key to our aesthetic, intellectual, cognitive, and even spiritual satisfaction,” wrote Edward O. Wilson, noted biologist and author. Today, no matter where one lives, there is a yearning, like never before, for outdoor spaces. And it’s no wonder, now that we’re firmly planted in the midst of Year Three of the pandemic, that we’re seeing green—and if not, we’re dreaming of it. Parks, put simply, have become more important to our wellbeing than ever.

Our desire to be in nature is evident through popular healthful pursuits like forest bathing, a wellness ritual that originated in Japan in the 1980s. You can forest bathe on your own by simply spending more time in nature among the trees or choose to join small groups of forest bathers at numerous spas and wellness centers both here and abroad. (There’s something new called cactus bathing, but I’ll save that for another time.) In Washington, DC, there’s even a doctor who prescribes walks in the park. Dr. Robert Zarr, a pediatrician, helped create a community health initiative called DC Park Rx in an effort to treat chronic disease and promote wellness. And, for those app-obsessed, there’s something called NatureDose, a personalized nature prescription mobile app that can monitor, quantify, and evaluate your exposure to nature. In other words, you can now track the time you spend in the great outdoors much like you count your steps.

Which brings me back to a walk in the park. I was surprised to learn recently that more people annually—eight million to be exact—visit the High Line, a public park in New York City that was once an obsolete railroad, than visit all of New York’s many fine museums and even the Statue of Liberty. I discovered this head-scratching fact when speaking with Victoria Newhouse, architectural historian and author of Parks of the 21st Century: Reinvented Landscapes, Reclaimed Territories.These numbers, she notes, reveal a real hunger for open spaces. “The critical importance of parks has been forcefully brought home by the coronavirus pandemic,” states Newhouse, who shares how her long walks in Central Park during the height of the pandemic in 2020 were “a powerful incentive to consider the role of landscape within a changed world. In late April, the park had returned to life: Trees in bloom and masses of delicate young flowers helped me to come to terms with the crisis … the city was quiet, but the park was even quieter … walking through areas restricted to pedestrians never fails to be calming. The annual rebirth of vegetation and revival of wildlife in Central Park provided a glimmer of hope as little else did during the dark days.”

We are in the midst of a worldwide burst of park building—especially parks on reclaimed land—land that has been considered worthless for generations. Newhouse credits the rise of public parks to three things: the launch of the environmental movement in the 1960s; the advent of the post-industrial age; and the rapid erosion of public space, which she says began with suburbanization. Parks of the 21st Century, written with landscape architect Alex Pisha, is a beauty, a true collector’s item that couldn’t have come at a better time. The two embarked on an around-the-world adventure in 2016, traveling to dozens of public parks in the United States, Canada, Europe, Mexico, and China. Fifty-two spectacular and very different parks were chosen for the book. There are now verdant, meandering parks where there were once polluted lands that housed factories, airports, railroads, quarries, and industrial waterfronts.

“With the outdoors, like the indoors, the first rule [of design] is comfort. If it’s outdoors, there’s shade, navigable paths, not too steep, and protection from the wind,” explains Newhouse. “Whether indoors or outdoors, you have to feel good about the space.”

The park that was “the heart of the project” was the Dequindre Cut in Detroit, which was built on a former rail line. “This was one of the major efforts that Detroit had to gain back its financial viability,” shares Newhouse. “It sought to create a unifying identity for disparate neighborhoods, provide much-needed green space to underserved communities, and act as an outdoor gallery for the display of urban art. It was tremendously effective in improving and connecting some of the neighborhoods.”

Where does Newhouse see the greatest opportunity for public park projects? “Anywhere land is being occupied by something that is no longer valid,” she says. “It’s a little like the movement in the 1970s in Manhattan. There were so many loft spaces formerly used for small-time manufacturing that were converted into loft spaces for artists to live in. The key is not to allow any space to go unused.”

Parks, Newhouse shares, are often begun by a couple of people in the community. “It takes one person with an idea to ignite a fire under people.”

While you’re out and about, be sure to explore: “Growing an Urban Eden.”