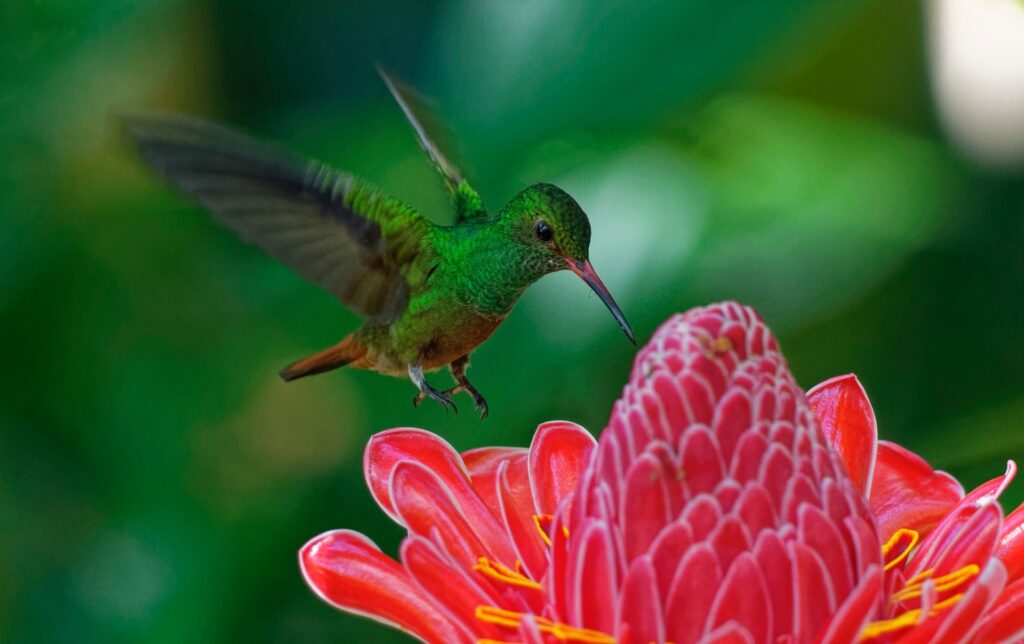 For one, it’s possible to be slow and fast at the same time.

“How does she do that?” I exclaimed, peering out the window at the stationary-yet-buzzing ruby-throated hummingbird outside my window. Considering myself a quite different animal, I realized maybe that’s not so, as I stood motionless with a million questions flying through my head.

The feathered one who caught my attention is just one of over 330 species of hummingbirds with whom we humans cohabitate. Spread throughout North and South America, they thrive in varied climates of the Western Hemisphere—from the warm equatorial belt to the edges of the Andean snowfields.

A Wisdom Still and Fluttering

During this particular hummingbird’s stay in our shared yard, whenever I caught a glimpse of her jewel-tone green wings—only male ruby-throated hummingbirds have the namesake coloring—I stopped to meditate near her, reflecting on what wisdom this tiny creature might bring.

Lesson #1: Be mindful about speed.

I soon realized that hummingbirds are an excellent example of a dialectic: It is possible to be slow and fast simultaneously. With heart rates up to 1,260 beats per minute and a breathing rate of about 250 breaths per minute, hummingbirds may appear suspended in space, but don’t be fooled. There’s a lot going on inside those modest bodies.

Reflect: How often do I stop to check in with what is going on in my body? When the day seems like it is moving too fast and there’s not enough time for my ever-expanding to-do list, what might I gain by stopping and checking in with my breath? When I do mindfully return to action, can I do so more slowly and efficiently?

Lesson #2: Be mindful about not coming to conclusions too quickly.

A story is told about the well-known ornithologist John James Audubon that reveals why it is risky to consider scientific knowledge about other species as “absolute facts.”

Here’s how the tidbit goes: Audubon was out one day doing his traditional practice of shooting a bird (yes, with a gun) that he would later pose and paint a likeness of (yes, I know, #tragic). The unlucky bird this day was a goose. Upon picking the lifeless feathered one off the ground, he noticed a dazed hummingbird lying nearby. With his astute scientific prowess, he reasoned that clearly, the little bird had been hitching a ride and fell off during the goose’s descent to the ground.

Before we chastise Audubon too much for this observation, I should reveal that he was not the first to suggest smaller birds rode on larger birds during migration—nor would he be the last.

Indeed, history is littered with once-believed scientific theories that have since been debunked.

Reflect: What assumptions am I making about others (human or other-than-human) without enough accurate knowledge about their lives? Can I commit to learning more about other beings before suggesting I know why they behave as they do?

Audubon was not the only “bird-lover” who killed the beings he found intriguing. Taking specimens has been a part of the natural sciences since their origin.

What’s more, in the early nineteenth century, fashionable ladies sought hummingbirds as a popular accessory for their hats, creating a profitable trade between tropical America and Europe. “In one year, a single London dealer imported more than 400,000 skins from the West Indies alone,” explains naturalist Alexander F. Skutch in The Life of Hummingbirds.

While many of us would balk at festooning stuffed birds on our heads, animal skins remain prevalent in high fashion. Yet, that practice is fading as consumers increasingly demand ethical, sustainable, animal-free clothes. Designers are stepping up, from ultramodern Rombaut footwear to Dauntless animal-free leather jackets. Chain stores like H&M and Gap have gone fur-free, eschewing trends like winter hats topped with raccoon fur pom-poms. And many consumers are passing over down-filled coats and comforters for cruelty-free alternatives that don’t require the painful plucking of our feathered friends.

Reflect: What does mindful shopping look like for me? Am I willing to consider changing practices that harm birds and other beings? If so, check out the Good on You clothing app, which rates brands on factors including sustainability, worker conditions, and whether they use animals. Or join a campaign on the Buycott app to help you “vote with your wallet.”

Lesson #4: Reflect on the roundtrip.

Although the hummingbird who appears outside my window each summer may appear fragile and short-flighted as she zips from flower to flower, her yearly migration will likely take her from New York to Florida and then on to the Yucatan peninsula. By herself! On the last leg, she will fly solo over 500 miles across the Gulf of Mexico in a single trip. After the winter, she’ll reverse this route.

Migrating birds do not fly continuously in one direction seeking the perfect habitat. Instead, they find multiple habitats where they can thrive and sense when it is time to move on. They don’t overstay their welcome in one location, allowing resources to replenish in their absence. And perhaps most importantly, they know when to journey and when to return.

All too often, I think, we speak of spiritual journeys in metaphors that suggest a one-way trip to some pinnacle of enlightenment (One mountain! Many paths!). And yet, our travels are sometimes cyclical (Oh, I’m here again?) and at other moments more spiral in nature (This looks familiar, yet somehow different!).

Reflect: What if we looked at our lives as a round trip? Coming home to the place from which we began, only to start over again.