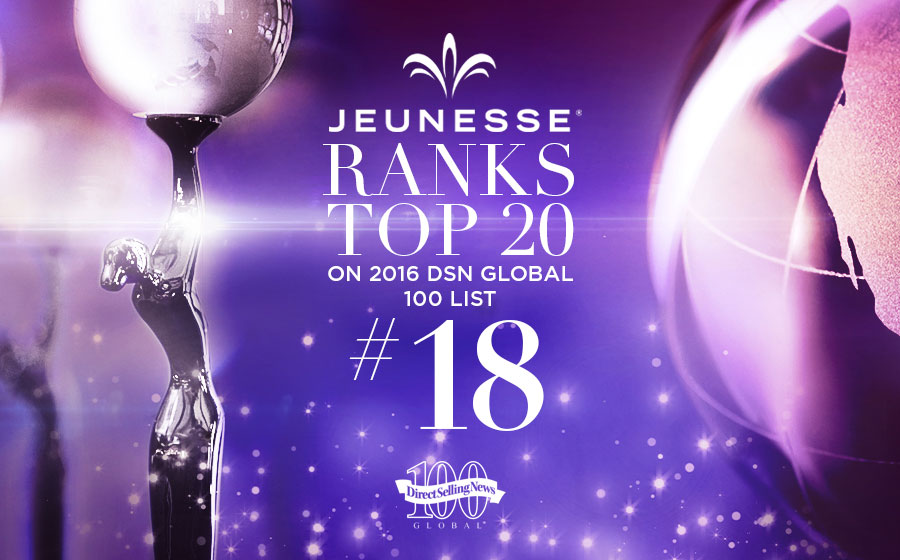 In just six short years, Jeunesse has built a global billion-dollar brand in the direct selling industry. After reaching $1.1 billion in annual sales in 2015, Jeunesse continues to reach historic milestones and make headlines all over the world. We’re pleased to announce another phenomenal milestone in Jeunesse history!

Direct Selling News (DSN) has revealed its annual list of the top 100 companies in the direct selling industry, and we are pleased to announce Jeunesse was ranked among the top companies worldwide, coming in at #18 on the DSN Global 100 List and #9 on the North America 50 List!

Jeunesse has ranked on the DSN Global 100 List since 2012, and has advanced steadily ever since, jumping 20 spots from last year. Jeunesse bumped up 10 spots on the North America 50 List.

“We are pleased and honored to be among the Top 20 companies in the world and the Top 10 in North America,” said Jeunesse Founders Randy Ray and Wendy Lewis.

Congratulations to our amazing family of Jeunesse Distributors around the world. It is your hard work and commitment to our collective mission to change people’s lives that have made this achievement possible. Thank you for helping to make Jeunesse the youngest company in the industry to obtain top tier worldwide ranking and the fastest company in direct selling history to reach billion-dollar annual sales!

We are so proud of the company we are building together and believe the future is brighter than ever,” said Scott Lewis, Chief Visionary Officer.

The Direct Selling News Global 100 List is the most prestigious ranking of direct selling companies in the world. The annual list was created to provide a clear picture of the global impact of the industry. Created in 2015, the North America 50 is a subset of this list focused on companies headquartered in North America.