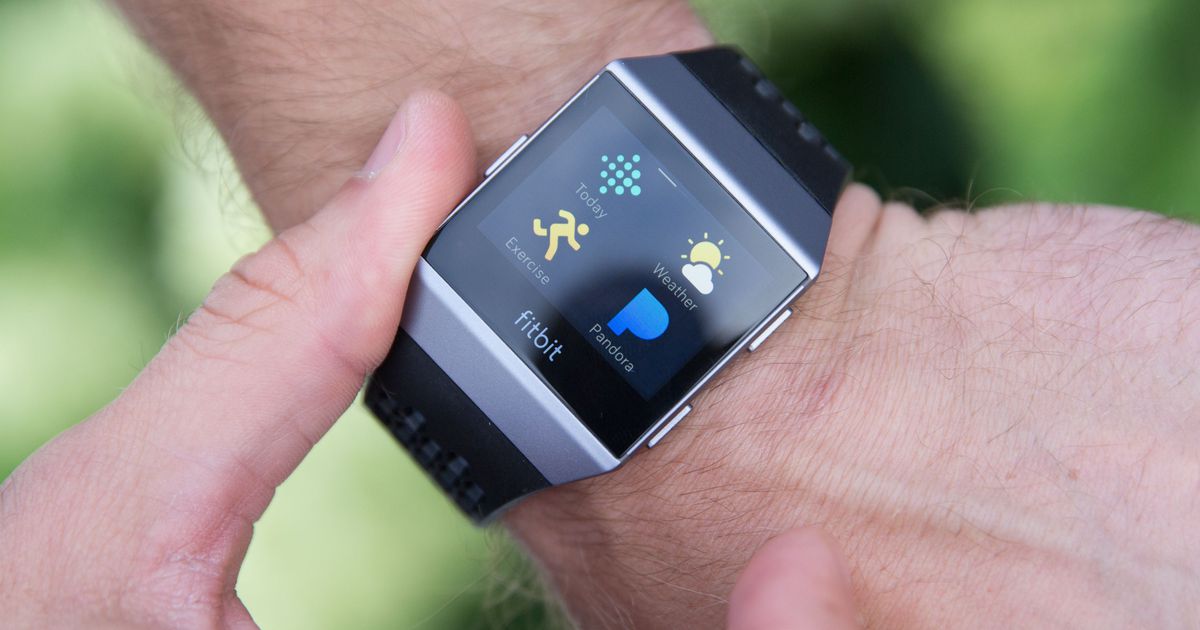 Over the past couple of years, Fitbit has witnesses its signature fitness wearables slowly being eclipsed by the Apple Watch and other smartwatches like Samsung’s Gear line and Google’s Android Wear. It released the Blaze watch last year, which was a step up for Fitbit in terms of sophistication, but still left customers wondering when it would release a true smartwatch, complete with its own platform and apps.

Well, wonder no longer. Fitbit will launch its long-teased first real smartwatch, the Ionic, in October. The smartwatch will arrive alongside a pair of wireless headphones called the Fitbit Flyer and a new version of the company’s smart scale, the Aria 2.

SEE ALSO: Bizarre wearable wants to shock you awake so you don’t fall asleep at the wheel

Like virtually all of Fitbit’s wearables, the Ionic is designed around activity tracking, but it also includes smartwatch features like NFC payments and a built-in music player, which could make it more attractive to people who aren’t satisfied with the company’s more basic offerings. The Ionic is also the first device to launch with the company’s new Fitbit OS and app ecosystem, called App Gallery.

I got a chance to try out Fitbit’s new products (minus the Aria 2) at a preview event last week.

The star is of the group is the Ionic. The smartwatch’s design matches the pictures that leaked out long before release. I wasn’t a fan of those images when I saw them, but that was before I saw the Ionic IRL.

The smartwatch looks miles better in person, largely because of the simple slim profile and a screen that’s bright and clear whether you’re indoors, outside, and even in the pool. There were no issues with glare even in the bright sun.

The Ionic comes in burnt orange, silver and graphite gray finishes, and you can choose from a few different colors and style of bands. The Ionic feels light on the wrist, with less bulk than some other smartwatches I’ve worn. It’s still much thicker than a normal watch, though, which might turn off those who haven’t embraced wearables because of their size.

Possibly the biggest news about Ionic is Fitbit’s brand new OS and app store, called App Gallery, both based on Pebble, another Fitbit acquisition.

Launch apps will include Pandora, Starbucks, and Strava, with more in the pipeline. The SDK is based on Javascript and SVG and will be completely open, so anyone will be able to create their own app to either share with friends or submit to the App Gallery.

The smartwatch comes chock-full of features that the company believes will give its wearers an even more powerful way to track their well-being.

“We’re not introducing a smartwatch just to introduce a smartwatch,” Fitbit CEO James Park said at the prelaunch event. “We feel strongly that smartwatches are a platform to deliver the most advanced health tools the market has seen.”

Ionic is packed full of sensors and tech to give its wearers those tools and more. The watch offers GPS for phone-free run tracking that Fitbit claims is best-in-class, along with accelerometers, a gyroscope, an altimeter, and an ambient light sensor. There’s also the company’s PurePulse heart rate monitor and infrared and optical sensors to measure blood oxygenation, or SpO2. The SpO2 sensor opens up the door for the Ionic to help identify health conditions like sleep apnea, but we’ll have to see how doctors and patients actually use the new data readings to know if that will work.

Fitbit says you’ll be able to automatically track your workouts using those sensors with the enhanced SmartTrack feature, and the company is overhauling its FitStar premium workout planning service and rebranding it as Fitbit Coach. I didn’t have a chance to check out the automatic tracking during my hands on experience, but I did record a bootcamp-style workout. The heart rate tracker was particularly handy; the stats were much easier to access on Ionic’s touchscreen face than from some of Fitbit’s other devices with tiny displays, like the Alta HR.

The watch is water resistant up to 50 meters, and swimming is one of the activities that can use automatic tracking. I tested out the Ionic in a pool at the preview event (I didn’t track any laps, though), and the watch is surprisingly manageable, even when it’s wet.

If you think a smartwatch absolutely needs contactless payments in 2017, the Ionic has you covered. It’s equipped with NFC wireless tech with support from MasterCard, American Express, and Visa. Fitbit was able to include the tech thanks to its acquisition of Coin last year.

I tested out the Ionic’s payments feature at a pop-up booth during the preview event, and it was a seamless, simple process — but that was specifically managed by Fitbit for the occasion, so it remains to be seen how it’ll work out in the wild.

The Ionic’s music abilities go beyond just being able to run the Pandora app. The watch boasts 2.5GB of memory for on-device storage and users will be able to download their own music or Pandora playlists if they’re premium subscribers.

But what do all these sensors and abilities mean for the Ionic’s battery life? Fitbit makes the eyebrow-raising claim that the Ionic will last more than four days on a single charge, although that drops to 10 hours if you turn on the GPS. I haven’t had a chance to verify Fitbit’s claim just yet, but if true, it would be a big jump above most of the competition, which typically need to be charged every day.

Ionic debuts in October for $299.95, with optional Sport and Horween leather bands (seen above) sold separately.

Fitbit’s wireless earphones don’t have any fitness tracking or sensors, but the brand’s DNA is still unmistakable. The Fitbit Flyer is made for the gym, with earbuds that sit flush to the wearer’s head and thick, sturdy sweat-proof (IP67 rated) cords. There are multiple options to adjust for fit, allowing wearers to pick between a wing or fin design and a range of in-ear tip sizes.

The Flyer’s buds sit well in the ear, and I had no issues with the fit. I didn’t have a chance to use them during a workout yet, so we’ll see how well they hold up to activity.

Fitbit teamed up with Waves Audio, an audio company known for high-end studio equipment, on the sound components of the Flyer. There are two settings to choose from: the standard “Signature” option for normal playback, or Power Boost which ratchets up the bass and takes advantage of the Waves technology.

I was pleasantly surprised by the sound quality during my hands-on time. Heavy bass lines in songs like Brand New’s “Lit Me Up” and Kendrick Lamar’s “DNA” stand out, but they don’t overwhelm the other aspects of the music. It’s easy to pick out every individual section of songs with more layered instrumentals, like Manchester Orchestra’s “The Gold,” and the vocals on pop songs like Harry Styles’ “Sign of the Times” really soar. The Flyer really does sound excellent.

The headphones are meant to be a companion to Ionic, although they’re sold separately, and can pair with up to three devices at once via Bluetooth. Fitbit says that makes switching between your phone and the watch more seamless, but I wasn’t able to get it to work during my short hands-on time.

Fitbit reps are quick to point out that the headphones aren’t just for connecting to the Ionic while working out; the rated six hours of battery life could make them a viable option outside of just the gym. A quick-charge feature lets you get an extra hour of playback from just a 15-minute charge, too.

The Flyer will hit the market in October along with Ionic for $129.95.

The new Aria 2 smart scale has been updated with a new design and reengineered for more accurate readings of stats like BMI, body fat percentage, and lean mass. I didn’t get a chance to see the scale at the preview event, which was more focused on the Ionic and Flyer.

The Aria 2 will be released later this fall for $129.95, the same price point as the Flyer, to round out the group.

WATCH: These vibrating wristbands claim to melt stress away in just 30 seconds