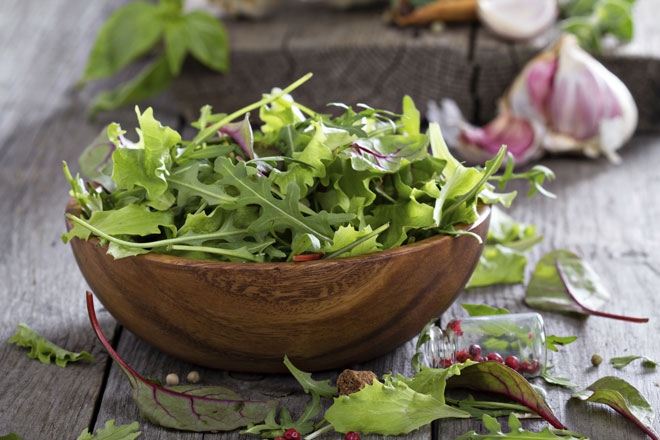 “Let food be thy medicine and medicine be thy food.” —Hippocrates

A new study has found that eating leafy green vegetables – such as spinach, kale and mustard greens – can have a dramatically positive effect on our thinking abilities. In fact, older people who eat one to two servings a day of leafy greens have the cognitive skills of a person over a decade younger.

According to the Alzheimer’s Association, Alzheimer’s is the sixth leading cause of death in the U.S., with almost most two-thirds of those with the disease being women.

For several years, researchers followed 954 older adults (average age 81) from the Memory and Aging Project, a study which aims to identify factors leading to healthier cognition.

Participants filled out a 144-item questionnaire in which they reported their daily food and drink consumption. Their cognitive skills were also evaluated each year through a battery of 19 tests. The findings were clear: those who ate more leafy greens had a significantly slower rate of cognitive decline. It was as if they had the brain of a person 11 years younger.

The researchers also investigated which particular nutrients were mostly responsible for the big boost in thinking skills, and they found that vitamin K, lutein, folate and beta-carotene play a big role. While earlier research has linked folate, beta-carotene and luteine to better cognition, this was the first study to show the brain-protective effects of vitamin K.

As baby boomers approach old age, there is a great public demand for lifestyle behaviors that can keep memory loss at bay, says Morris. Making the simple choice to eat leafy greens and other foods rich in vitamin K, lutein and beta-carotene can protect the brain and preserve its functioning.

Other good sources of vitamin K, folate and beta carotene include brightly colored fruits and vegetables. It’s wonderful to know that something so simple—and delicious—as eating a daily kale or spinach salad (or smoothie) can help preserve our very precious thinking skills. Food truly is the best type of medicine.              By:Traci Pedersen