Bell Peppers and their Benefits 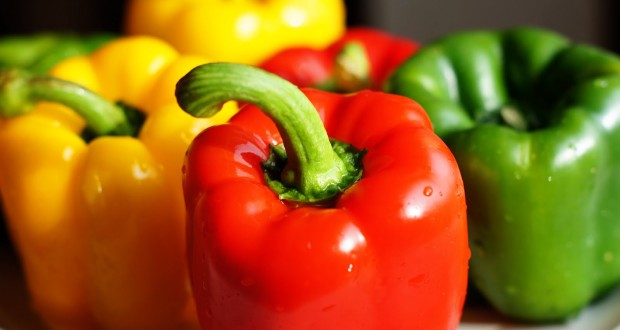 Bell Peppers and their Benefits

I am not so much of a bell pepper lover. I love how they look, particularly the bright colored ones. They are commonly used in salads, add color and crunch to pizza, and will most probably see in Afritada and Kaldereta.

I got curious about it because I was particularly amazed by a three-foot-tall plant growing in a 1 x 2-meter patch of soil on our garage. My mom is fond of throwing away vegetable seeds and peelings on this patch of soil. Much to our surprise a plant grew there and is now bearing several fruits or should I say beautifully shaped vegetables with a glossy exterior that comes in a wide array of vivid colors ranging from green, red, yellow, orange, purple, brown to black.

I later found out that these were bell peppers.

Just what can bell peppers do to your health?

Perhaps it’s the intense color variety, or maybe it’s the flavor that gives it away, but bell peppers have more than their share of vitamins and minerals. Regular consumption of foods rich in vitamin C, like green peppers, for instance, which contain more than twice the vitamin C of an orange, helps protect against scurvy, boosts the immune system, lowers inflammation in the arteries that leads to heart disease, diabetes, and cholesterol build up, and scavenges harmful free radicals from the body. Other nutritional benefits of bell peppers include thiamin, niacin, folate, magnesium, and copper.

Bell peppers are low in calories. A single cup will give you more than your daily quota of Vitamin A and C!
They contain plenty of vitamin C, which improves your immune system and keeps your skin smooth with a youthful glow.  The highest amount of Vitamin C in a bell pepper is mostly found in the red variety.

Red bell peppers contain beta-carotene, which lavishes you with antioxidants and anti-inflammatory benefits.

If cooked for a short period on low heat, bell peppers retain most of their sweet, almost fruity flavor and flavonoid content, which is a powerful nutrient.

The sulfur content in bell peppers makes them play a protective role in certain types of cancers.

The bell pepper is a good source of Vitamin E, which is known to play a key role in keeping skin and hair looking youthful.

Bell peppers also contain vitamin B6, which is essential for the health of the nervous system and helps renew cells.

Certain enzymes in bell peppers, such as lutein, protect the eyes from cataracts and macular degeneration later in life.    By Ann Gabriel |