This tiny root veggie is believed to make up 80% of our paleo ancestors’ diet and was even found in the tombs of the ancient Egyptians. It’s slowly making it’s way back into the superfood spotlight.

I often look to ancient cultures to study their dietary trends. I figure the food they ingested was closer to the source, pointing to more “heirloom” strains that are, in turn, better for my health.

Tigernuts, was a food that struck me as very interesting. It was supposedly 80% of our paleo ancestors’ diet as well as a known staple food for the ancient Egyptians, dating back to predynastic times. These “sacred roots” were even found in tombs, suggesting that they were such a precious commodity that the royals wanted to take them to the afterlife.

The name tigernut is a bit of a misnomer. It’s actually not a nut, but a tiny root veggie called a tuber. So why have we forgotten about this tiny gem? Maybe we’ve just lost touch with our “roots.”

Tigernuts pinged my radar through a company, Organic Gemini, who make a surprising amount of products from the mini tuber. Tigernuts are actually traditionally used to make horchata and you can also eat them as a dried snack, in flour form for baking, and is even made into a oil.

Very few people have allergies to tigernuts and are often labeled as “allergy-free”. They are also paleo, vegan, gluten-free, nut-free and can be eaten raw.

Furthermore, tigernuts are the best known plant source of a special type of fiber called resistant starch (a.k.a prebiotics). Prebiotics are known to be healthy for your gut’s microflora and is said to boost the immune system.

Tigernuts are also chock-full of other goodies. For example, they contain as much potassium as coconut water and as much iron as red meat and spinach. They’re also rich in vitamin E and unsaturated fatty acids, such as oleic acid, which have been shown to decrease cholesterol significantly and hydrate skin.

As far as taste goes, tigernuts are pretty unique. They have a slightly sweet taste and a crunchy chewiness that is unlike anything I’ve ever tasted. Almost like a cross between an almond, a macadamia nut, and a garbanzo bean, perhaps?

Including these nutritional powerhouses in our diet may be a step toward a healthier body and I’m happy they’re back on the radar and scene.  By: Bess O’Connor 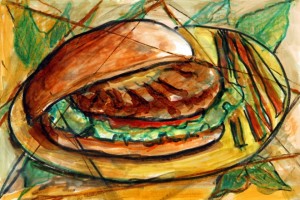