16 Health Benefits of Honey, According to Science (+2 Delicious Honey Recipes) 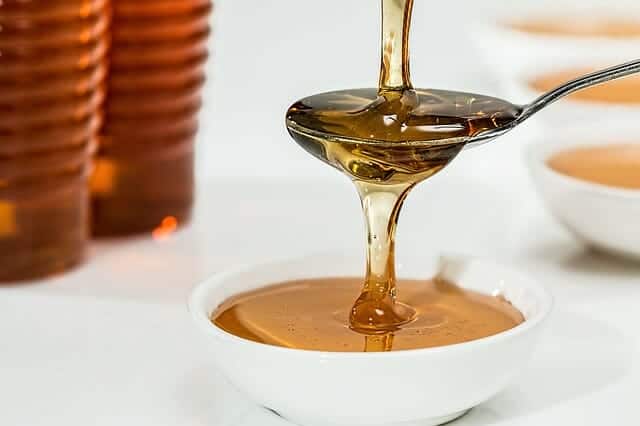 16 Health Benefits of Honey, According to Science (+2 Delicious Honey Recipes)

Honey – known to some as the nectar of the gods – is a delicious, thick golden liquid that’s made by honeybees and savored by people around the world. Honey’s one of the sweetest substances you can find on the planet, making it a favorite for children with a sweet tooth!

Honey makes a great alternative to processed sugar. It’s certainly sweet enough to replace it, and it also has a more intricate flavor. Not only does it have a richer flavor, but it has a lot of health benefits that you won’t find in your everyday processed table sugar.

Honey’s typically imagined as gold but it actually comes in a variety of colors from amber to white to brown and black. It depends on which flower was used to provide the nectar the honey was made from. This means that the nutritional impact of different types of honey can be slightly different.

There are only a couple differences between honey in terms of nutritional benefit. There is, however, a huge difference in the health benefit of honey that has been processed and packaged. You’ll want to buy raw honey as often as possible because its nutrients won’t be damaged. The main types of honey you’ll want to look out for are table honey (the typical variety you’ll find for sale at your grocery store) and manuka honey.

Honey is made by bees harvesting nectar with their mouths, which is then mixed with enzymes in the bee spit which turns the nectar into honey. The honey is carried back to the hive where it’s deposited on the walls for storage.

Being practically made of sugar, honey is naturally quite high in carbohydrates.

Copper helps your body grow strong tissues and bones, much like the more well-known mineral magnesium.

Manganese also helps your body’s bones grow strong, as well as helping to regulate the growth of strong skin.

Iron helps your body produce blood cells and can lead to anemia if you don’t get a regular supply.

Honey also contains between 0.01% and 0.99% of your D.R.I. for zinc, sodium, selenium, potassium, phosphorus, magnesium, calcium, vitamin C, pantothenic acid, folate, choline, and vitamin B6. That’s a huge variety of vitamins and minerals for any one food to contain, even if they’re in trace amounts.

These aren’t the only nutrients present in honey, either. There are a fair number of phytonutrients (plant-based nutrients) and antioxidants found in the stuff. It’s difficult to create a comprehensive list of all these micronutrients and plant-based nutrients, though – in part because we don’t even know if we’ve identified them all.

What we are sure of, though, is that honey has been studied again and again. It demonstrates a huge number of health benefits when consumed in healthy amounts of one to two teaspoons daily. Here are some of the benefits that consuming honey on a regular basis can provide – remember, manuka honey will provide the strongest benefits when compared to raw honey. Raw honey provides better benefits than typical store-bought honey.

The immune system is a complex combination of mechanisms in the human body that’s responsible for fighting off infections and diseases. Having a properly functioning immune system is crucial to avoid getting seriously ill – without a healthy immune system, even the common flu can reach a deadly seriousness.

The lifestyle lived by most westerners is not good for the immune system. We rely on antibiotics to cure illnesses and we eat a lot of junk food. Fortunately, things like honey can help boost the immune system.

Honey, being an anti-bacterial and anti-inflammatory, can take a lot of stress off the immune system. This allows it to work more effectively, instead of being overworked. Consuming a lot of foods that help detoxify your body and improve its metabolism and digestion is very important for taking strain off the immune system.

Honey can also be used as part of a daily cleansing regimen. Mix a teaspoon of honey with a teaspoon of lemon juice. The lemon juice should be acidic enough to dissolve the honey – if not, simply stir it in some hot water and then add the mixture to a glass of cool water. This powerful, yet simple concoction will help your body clear itself of toxins. This will allow your immune system to get stronger and more efficient at fighting off disease.

Conclusion: The immune system operates by many mechanisms which protect the body and fight off disease. Honey can bolster the immune system by taking some of the strain off its different systems. This allows the immune system to work more effectively on important tasks, and become stronger and more efficient.

If you’re susceptible to coughs and colds, you’ve probably shelled out a lot of money on pharmaceutical cough medicine. Dextromethorphan, the common ingredient shared in most over-the-counter cough syrups, is pretty effective at inhibiting coughs. This doesn’t particularly help your body develop its own defenses against coughs, though.

First off, honey soothes the nerve endings in the throat. This is why it’s such a popular home remedy for sore throats and coughs – it keeps the tissues calm and relieves itching.

The World Health Organization has even credited honey as being an effective anti-inflammatory, anti-irritant that can eliminate coughs with startling efficacy. Honey has even rivaled traditional over-the-counter medicines with its ability to fight coughs.

To make an awesome cough syrup out of natural ingredients, try this simple recipe:

Heat up a pint of honey in a small saucepan over low heat. Don’t heat it for too long or too much, or you can damage the antioxidants and other compounds that are beneficial for your health. In a separate pan, boil enough water to cover your lemon. Put the lemon in once it’s boiling and let it sit for a few minutes to kill any bacteria on the skin.

Let it cool, then slice it and add it to the warm honey. Simmer on a very low temperature for an hour so the lemon juice infuses with the honey, and then try and strain any solids out from the mixture (this can be tricky if the mixture turns out thick. Ultimately, it’s not necessary.)

This can be kept in the fridge and should store for a couple months. Try not to take more than four tablespoons a day, and space them out evenly.

Conclusion: Honey has shown itself to be very effective as a cough suppressant. Not only does it suppress coughs, but it eases the pain and soreness associated with having a cough. It can be easily made into a simple syrup and statistically been shown to be as effective as over the counter medicine.