Buckwheat has often had a dull reputation associated with it, particularly because its flavor is somewhat lacking and it is a healthier option that requires more effort when being prepared. It is also not as readily available as other harmful, fatty snacks and meals may be.

As we strive to eat more nutritiously, and as we uncover seemingly increasing harmful effects of processed flours and grains, it’s good to know that nutty, wholesome, healthy, grain-like alternatives such as buckwheat exist. 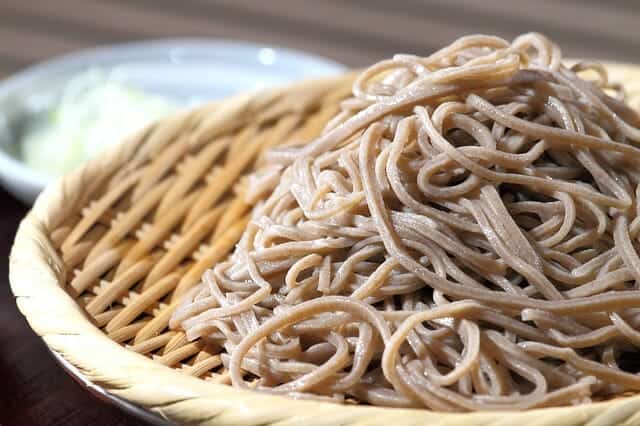 Below is a list of the top 14 benefits of buckwheat, followed by 8 delicious buckwheat recipes you can try today to incorporate more of this admirable, nutritional, reliable seed into your everyday life.

1. Buckwheat is Not a Grain

Nutritionally, grains are unnecessary and can even be deemed as harmful, particularly because they can damage the digestive tract, are high in caloric content, and reduce the absorption of calcium.

As a result, avoiding grains is a popular dietary option. Fortunately, buckwheat, often mistakenly listed as a grain, is actually a pseudocereal— or fruit seed– that comes from the Polygonaceae family. Consumed in either flour or its pure form, buckwheat is most closely associated with other pseudocereals, such as quinoa.

Therefore, buckwheat is not quite an actual cereal, but its nutritional values and usage diversity make it comparable to not only cereals, but grains, millet, rice, and barley as well.

As a result, it can often be treated, cooked, and prepared in similar manners. It can typically be factored into recipes that call for these comparable ingredients.

The grain-like way that it is soaked– often for long periods of time or overnight– and cooked can undoubtedly be deceiving, leading some to believe that it is a grain.

Believe it or not, it’s actually not a form of wheat either. The portion of buckwheat that is edible derives from a plant related to rhubarb and sorrel.

Bottom Line: Buckwheat is a seed, not a grain or a wheat. If anything, you should go out of your way to consume it for its benefits, rather than mistakenly avoid it!

On its own, buckwheat grows efficiently and quickly. A likely contributor as to why it is a popular global crop, harvest occurs just 10-12 weeks after plantation.

As a result, it does not require the same attention, pesticides, and maintenance that other seeds may in order to enhance growth, leaving the seed clean of potentially harmful additives.

Pesticides, though used to deter pests from the growth of crops, have also been known to kill innocent, beneficial insects, fish, birds, and other plants. Limiting the use of pesticides is not only favorable for the ultimate consumer of the crop, but for the environment and flourishment of other beings, plants, and crops as well.

Additionally, while buckwheat flowers have been known to keep the honeybee population flourishing with their morning nectar, they also support the existence of smaller insects, particular hoverflies.

The buckwheat crop itself keeps pests that are attracted to other crops at bay, ensuring that potatoes, broccoli, and other vegetable crops remain untouched. Buckwheat simply needs to be grown within 20 feet of said crops in order to be effective.

Groats, the correct term for buckwheat “grains” or buckwheat hulled seeds, are reliable, successful crops that can endure both cool and dry climates, acidic soils, and unpredictable weather. Over time and particularly in Tibet, buckwheat has even been known to grow at altitudes higher than other cultured plants. Late spring and summer crops will grow taller than those planted any later.

Although it technically grows best in warmer weather, buckwheat’s durability has contributed to its common plantation across cooler climates in the United States, Russia, and China.

As a bonus, it can also be used as a cover crop to reduce weeds. Buckwheat seeds can be purchased by most companies that sell cover crop seeds, but farm supply and health food shops also provide a decent selection.

Bottom Line: Buckwheat is packed with nutrients, not chemicals, and it reduces the need for harmful pesticides.

3. Buckwheat is a Great Source of Fiber

Buckwheat seeds, also known as “groats,” are full of dietary fiber, both soluble and insoluble. Insoluble fiber, unlike soluble fiber, does not dissolve in water. Soluble fiber is found not only in buckwheat, but also in oats, barley, beans, and lentils. Insoluble fiber can be found in nuts, seeds, and other whole-wheat foods.

Foods rich in dietary fiber protect us from various cancer diagnoses– including cancers of the esophagus, rectum, colon, stomach, and mouth– among other diseases.

Adding fiber to your diet also helps you feel full, increases the density of stools, dilutes harmful substances, and expedites their elimination from the body. The high fiber content in buckwheat is said to lower blood sugar levels following meals.

Just one cup of buckwheat contains 17 grams of fiber, closely amounting to the 25-30 grams recommended per day. As a result, groats are commonly categorized as “superfoods.”

Its high content of fiber eliminates the need to otherwise ingest other high-fiber fruits and vegetables. In fact, five servings of vegetables and fruits plus three servings of whole grains would have to be ingested to reach the 30-gram-per-day fiber recommendation.

Ironically, buckwheat is also used to treat diarrhea. However, buckwheat should be avoided by overly sensitive individuals, such as those with IBS (irritable bowel syndrome) or Crohn’s disease. The seed can either help or exacerbate symptoms and could cause gas and cramping.

One should also be careful to slowly but surely increase one’s intake of fiber, and therefore buckwheat, as too much too quickly can surely result in abdominal discomfort. However, drinking plenty of water is a perfectly acceptable motion to eliminate such.

Despite its misleading name and as noted previously, buckwheat is not actually a wheat, nor a grass. Since it’s naturally gluten-free, buckwheat is a perfectly acceptable alternative to barley, oats, rye, and wheat, thus making it preferred to those who are allergic to any of these elements.

Gluten has been deemed harmful for numerous reasons and it has recently been purposely avoided whenever possible as a result. It has been shown to cause asthma, vitamin B12 deficiency, excessive weight gain or loss, and it has been directly linked to the causes of up to 200 other medical conditions.

Gluten is also commonly a cause of dizziness, thyroid disease, skin disease, loss of balance, neuropathy, and nerve pain. It has been linked to the development of certain skin diseases.

It can also trigger testosterone issues in men, migraines, and liver damage. Gluten can also cause inflammation of the gut, otherwise known as “leaky gut,” leading to intestinal permeability.

This is significantly harmful because intestinal permeability disrupts the gut’s natural ability to filter out harmful items that we ingest on a daily basis, such as dust, viruses, and bacteria. If the gut fails to filter these items through the intestinal tract and out the other end of the body, they will be absorbed into the bloodstream.

The damage gluten can do to the body does not stop in the gut. Believe it or not, gluten can also affect the functionality of your brain. As a direct result of the gut inflammation and other microbiome disturbances caused by gluten consumption, your vulnerability to brain-related diseases such as dementia and Alzheimer’s disease is significantly increased.

If only for the sake of avoiding gluten, buckwheat is an admirably healthy seed for the body.

Bottom Line: Buckwheat is ideal for those seeking gluten-free foods, or those who suffer from other wheat and grain allergies.  Click HERE to continue reading this article….