10 Warning Signs of Cervical Cancer You Should Not Ignore

Cervical cancer is one of the most common cancers in women worldwide. It occurs in the cells of the cervix, the lower part of the uterus that connects to the vagina.

The American Cancer Society estimates that about 12,900 new cases of cervical cancer will be diagnosed and about 4,100 women will die from this disease in 2015. These estimations are shocking but true.

Almost all cases of cervical cancer are caused by a virus called human papillomavirus (HPV). Women of all ages are at risk of developing this cancer after they begin having sexual intercourse. 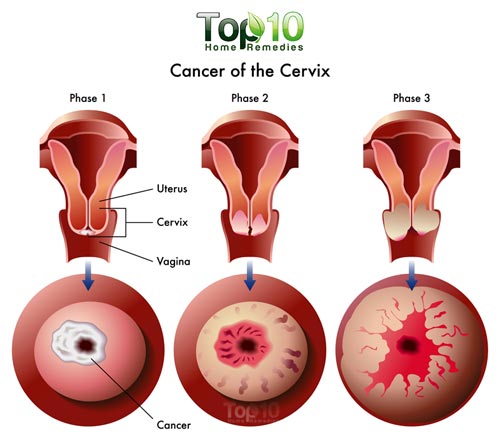 One of the scariest things about this cancer is that it does not show any symptoms in its early stages. After the disease has spread to the bladder, liver, intestines or lungs, the symptoms are more prominent.

Being an adult woman, if you notice any unusual changes or symptoms affecting your reproductive organs, consult your doctor.

Always bear in mind that your chances of successfully treating cervical cancer are higher if it is detected during the early stages. With the use of Pap tests and the HPV vaccination, it’s become possible to treat as well as prevent cervical cancer.

With knowledge of the risk factors and warning signs of cervical cancer, you can save yourself and others from a lifetime of suffering. 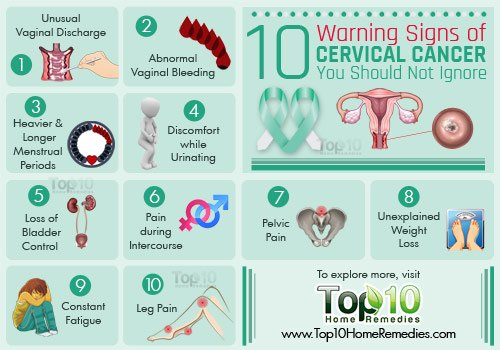 Here are the top 10 warning signs of cervical cancer you should not ignore.

An untimely bout of vaginal bleeding that occurs regularly could be an indicator of cervical cancer. It could also be due to other medical conditions, such as a hormonal imbalance, pelvic inflammatory disease or an infection in the pelvic organs.

As cancer spreads to nearby tissues, it creates new, abnormal capillaries that break easily and cause bleeding. Such bleeding may happen between menstrual periods, after sexual intercourse, after menopause and even after a pelvic exam.

Contact your doctor if you experience bleeding between menstrual cycles or following sexual intercourse.

When suffering from cervical cancer, vaginal discharge could be heavy, pale, watery, brown or mixed with blood.

If you experience this symptom, report it to your doctor immediately.

Painful intercourse is another important warning sign of cervical cancer. This symptom indicates advanced cervical cancer, which means cancer has spread throughout tissues and reproductive organs. Apart from pain, you may also experience other symptoms, such as thick, foul-smelling vaginal discharge.

There are other possible reasons for this particular problem, such as an infection or STD.

Do not ignore this symptom. Get your cervix examined by your doctor.

Pelvic pain is common among women. Cramping and aches are a normal part of the menstrual cycle and do not usually indicate the presence of cancer or any other serious condition. However, pain that lasts for longer periods of time and occurs more frequently could be a sign of cervical cancer.

If suffering from cervical cancer, you may experience pelvic pain at unusual times, and the pain may start suddenly at any time during the month. In addition, such pain usually does not occur unless the cancer is in a very advanced stage.

If you have experience pelvic pain or pressure, visit your doctor to find out the exact cause and rule out the possibility of cancer.

Cervical cancer can also cause discomfort during urination. In fact, it is one of the most obvious and prevalent symptoms of this deadly disease.

Urinary discomforts include burning, stinging or a tight sensation while urinating. Such symptoms occur when cancer has spread to nearby tissue. This requires immediate attention to prevent further damage.

However, urinary discomforts also can be due to other causes, such as a urinary tract infection, bladder problem, yeast infection or sexually transmitted disease (STD).

Get checked by your doctor for proper diagnosis and treatment.

Bleeding is considered heavy if you have to change sanitary napkins or tampons more often than once every 2 hours.

Apart from cancer, heavy bleeding can be due to a hormonal imbalance, fibroids, polyps, pelvic inflammatory disease, endometriosis or thyroid, liver or kidney disease. It can even happen due to certain medications.

Any change in the consistency of monthly periods should be discussed with your doctor. Remember that prevention is better than the cure.