10 Lies My Breast Surgeon Told Me

10 Lies My Breast Surgeon Told Me

According to the NIH, approximately 1 in 8 women will be diagnosed with breast cancer at some point in their lifetime. While technically true, this number is extremely misleading as it’s based on the lifetime risk of a woman who reaches the age of 90 years old, an age where breast cancer is exponentially more likely.

By way of contrast, the average 35 year old woman has only a 1 in 217 risk of developing breast cancer. Nevertheless, conventional health care practitioners and the American Cancer Society tend to err on the side of caution by stressing the importance of yearly mammograms for women over the age of 40.

However, recent studies illuminate that mammograms may have minimal benefit for younger women and women less at risk for developing breast cancer. Given this research and the detrimental effects excessive radiation, overdiagnosis and over treatment resulting from mammograms can have on otherwise healthy breast tissue and women’s emotional health, there is much debate about their efficacy as a diagnostic tool.

This debate became personal when my primary care physician handed me a referral for my first annual mammogram. Like most women, I was aware of the pros and cons, but didn’t want to take chances with my health, so I obliged. My caution was rewarded with what seemed like an endless series of excruciating mammograms, an ultrasound, a referral to a breast surgeon and a stereotactic needle biopsy, all of which resulted in a benign (noncancerous) diagnosis and months of needless uncertainty, anxiety and fear.

So this year, after a clean mammogram (following three years of meditation, yoga, a mostly raw food diet and a rigorous detox regime – learn about my journey here and here), when my breast surgeon recommended I schedule another six-month follow-up mammogram and begin taking anti-cancer prescription drug Tamoxifen “just to be on the safe side,” I opted instead for a second opinion. I met with health consultant and researcher Dr. Howard Jacobson, Ph.D, contributing author to Whole and Proteinaholic, who helped me challenge some of the most common myths about breast health, including the necessity for excessive mammogram screenings. Read on before booking your next one.

There are several different kinds of breast cancer, including inflammatory, metastatic, invasive ductal carcinoma, triple negative breast cancer, invasive lobular carcinoma in situ, and even male breast cancer. Unfortunately,mammogram technology is limited to two dimensional x-ray photos of breast tissue. In addition to using radiation, which can be harmful to delicate breast tissue when used over and over, mammograms can generally detect only the slowest growing cancers and small benign tumors (pseudo-cancers) that don’t pose significant health risks. As a result, they can easily miss the fast growing cancers that can develop between annual exams, like inflammatory breast cancer. Consequently, they can provide a false sense of security, keeping women from taking meaningful preventive steps like improving diet and lifestyle to minimize cancer risk.

As an alternative, many women are turning to more comprehensive screening tools, like ultrasound and thermography, which monitors minute physiological and metabolic changes in the breasts. These tools can more safely predict breast cancer way before a lump has time to form and be detected via mammography.

Though mammograms find about 70% of existing breast cancers, they also have a false positive rate as high as 89%. You’d think that earlier detection of smaller lumps would help save lives. But the evidence says otherwise. According to The Cochrane Collaboration, an independent non-profit research group, 2000 women would have to get annual mammograms for 10 years in order to save just one life. And because of those 20,000 mammograms, 10 women will have to endure unnecessary and potentially life threatening effects of radiation from overdiagnosis and over treatment. This doesn’t even begin to take into account the emotional suffering endured by almost 50% of women who become alarmed due to “false positives” (women with no traces of breast cancer who are mistakenly told they have a problem). As a result, the U.S. Preventive Services Task Force recommends that screenings start later, at age 50 since women between the ages of 40 and 49 are more likely to receive false-positive results due to substandard diagnostic tools and overaggressive treatment.

Lie #3. Calcifications are a telltale warning sign for breast cancer.

Breast calcifications are small calcium deposits that can develop in women’s breast tissue. Many breast surgeons believe that certain microcalcifications are an indicator of breast cancer requiring an automatic biopsy if found on a mammogram. However, microcalifications are very common in most breast tissue, and are usually benign.  According to BreastCancer.org, roughly 80% of biopsies of clustered microcalcifications turn out to be normal or benign. Twenty percent of these biopsies are cancerous, and of that 20%, many show no signs of tissue invasion. If you ever have a question about the accuracy of your mammogram report, or the radiologist’s recommendation for what to do with the results, be sure to get a second opinion from another radiologist who has expertise and a strong record for accurately reading calcification clusters on mammograms.

Lie #4: If you find a lump, only a biopsy can rule out cancer.

A biopsy is a procedure to remove a piece of tissue or sample cells from your body so they can be analyzed in a lab to confirm whether or not cancer is present. Under the current standard of care, biopsies are often considered authoritative and can trigger the beginning of cancer treatment, whether surgical (lumpectomy, mastectomy) or pharmaceutical (chemotherapy). But a recent study published in the Journal of the American Medical Association shows that the interpretation of biopsy results can often be highly unreliable. One hundred and fiften pathologists were shown 240 samples of biopsied breast tissue and asked whether each was precancerous or normal. They got the right answer about 50% of the time, the exact same odds you could expect from simply flipping a coin.

As a result, thousands of women are being treated for cancers they don’t have, and many are going untreated for actual cancers. Given how painful and stressful biopsies are, and the fact that they can actually spread cancers that would otherwise not have spread, they should be avoided whenever possible.

Lie #5: The best way to reduce your risk of breast cancer is taking prescription drug Tamoxifen.

Tamoxifen manufacturer AstraZeneca claims that the drug reduces breast cancer risk by 29%. They even publicize this number by paying doctors to promote it at medical conferences. But the truth is quite different: according to the same study AstraZeneca cites for this statistic, Tamoxifen only reduces the risk of developing breast cancer by 2.8%, from 9.8% to 7%. Though even a small reduction may be worth it for women who have already been diagnosed, the listed side effects of stroke, uterine cancer, and non-melanoma skin cancers are hardly worth the benefits for healthy women. In addition, the AstraZeneca data show that Tamoxifen actually increases actual death rates from breast cancer.

Lie #6: Breast Surgery (Lumpectomy, Mastectomy) is necessary to remove cancer after a diagnosis.

Since many cancer diagnoses are just plain wrong, breast surgery will not help remove cancer that was never there to begin with. The most common form of breast cancer is Ductal Carcinoma in Situ, also known as DCIS, a slow-growing form of cancer. Some researchers estimate that about 20 to 30 percent of DCIS and invasive breast cancers found with mammography may be over-diagnosed.

According to the Komen Foundation, left untreated, only 40 to 50 percent of DCIS cases may actually progress to invasive breast cancer. Since not all cases of DCIS become invasive breast cancer, many women who would have never developed invasive breast cancer – with or without treatment – are being subjected to lumpectomies, mastectomies, chemotherapy, radiation and hormone therapy they never actually needed. Unfortunately, surgery can actually accelerate the growth of “distant metastases,” meaning cancer growth in other parts of the body.

Like DCIS, many cancers are so slow-growing that most women will die with them, not from them. And simple lifestyle changes can slow, halt, and even reverse many cases of breast cancer.

Lie #7: Genetics are the major risk factor for breast cancer.

While some women (specifically those with BRCA1 and BRCA2 genes) are at higher risk of breast cancer than others, these risks can be reduced significantly through a clean, plant-based diet. Populations who eat less meat, dairy, and processed foods have fewer rates of breast cancer. And when people from those populations migrate to countries that eat animal-based diets with lots of junk food, their rates of breast and other cancers quickly rise to match that of their new environment. Genes are like the weed seeds of cancer. Diet is the soil, sun, nutrients, water, and weeding that either let the weeds spread or suppress them to grow healthy crops instead.

We’ve learned that screenings, mammograms, drugs, and surgeries aren’t necessarily preventing breast cancer deaths. The only option proven to prevent and slow the growth of breast cancer is lifestyle: minimizing exposure to toxins (in food, in cosmetics, and in the environment), achieving an ideal weight, and exercising.

Lie #9: Spending more money on a “cure” is the best way to prevent breast cancer.

This is a hard thing for us to say, because we both know many good people who devote their hard-earned time, energy and money to breast cancer research, advocacy and events. We also know many people that wear pink ribbons to honor the lives of loved ones impacted by breast cancer, and we respect that.

But here’s the truth: We’re being used.

The drug and device companies who make billions on cancer diagnostic and treatment products are the same ones being funded to find a “cure.” Moreover, most of the pink-hued products aimed to support “breast cancer awareness” contain toxic chemicals that are know to be carcinogenic and can actually cause breast cancer.  Don’t let billion-dollar pharmaceutical companies with an eye on their bottom line take advantage of your compassion for survivors of the disease: the pink ribbons are often just a way to put a human face on corporate profiteering.

Lie #10: Wearing “pink ribbons” is the best way to show our support for breast health.

We hate to be provocative or politically incorrect, but the pink ribbon is actually a halo distracting attention from the pharmaceutical industry’s war on vulnerable and misinformed women. The Susan G. Komen Society receives hundreds of thousands of dollars in donations and sponsorships from the dairy, egg, processed cooking oil, cosmetics and processed food industries, whose products are all known to increase the risk of breast cancer given their inflammatory and toxic effects on the body.

Moreover, the entire idea of supporting “Breast Cancer Awareness” is sorely misguided. Like all energy, thoughts are things, and instead of using the entire month of October to affirm more of what we don’t want women to experience — breast cancer — it’s time to start affirming what we do want — breast health. Though the pink ribbon profit machine may have to slow down as a result, adopting emotional and lifestyle choices that support healthy breasts — like a plant-based diet, toxin-free living, exercise and weight management — can actually do more than any pink ribbon.

So rather than waiting like damsels in distress for a medical breakthrough that will save us, or marching and racing in a desperate attempt to do something, let’s embrace the power that we do have to treat our bodies with love, and to help women everywhere learn about and have access to the food and lifestyle choices that actually can save their lives.

Now that deserves a ribbon.  By Bianca Alexander and Howard Jacobson, Ph.D. 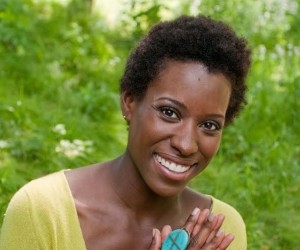